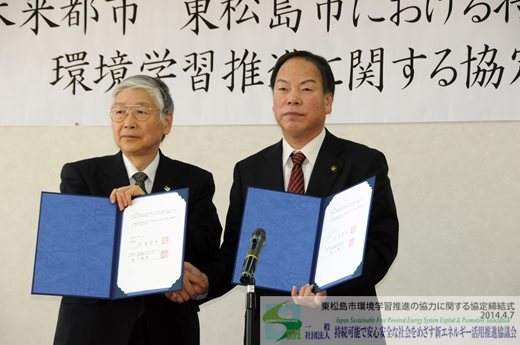 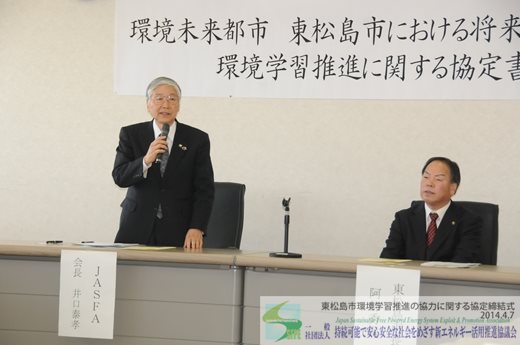 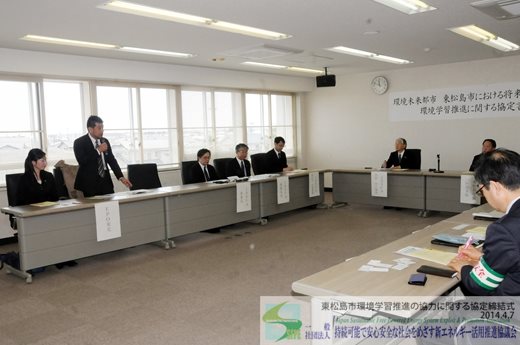 ・Overview of activities in Higashimatsushima of JASFA (from press release)
JASFA is, in the earthquake reconstruction of Higashimatsushima, and trying to obtain the solution of regional issues by the private method, In 2011with the support of the NPO Japan Platform, The “disaster victims employment support project“ expansion in the form of public lectures, for students with more than 150 people、with actual result that was tied to work through the more than 50 people half of which would like to work.

These activities, while that is inherited in activities such as research projects of social participation and employment support of elderly people, Higashimatsushima was established as a promotion organization of environment Future City Initiative「Higashimatsushima organization for progress and economy, education, energy」（ＨＯＰＥ), also contribute to the establishment、two of vice president were Chairman and Vice Chairman of JASFA has  take the cooperation to serve concurrently.

The main activities in HOPE, proposed by the planning subject of JASFA member a “collective house business“ of the leading project、more involvement also specific business development、even in this time of environmental conservation cooperative initiatives, of course city authorities cooperation activities with HOPE has worked well.

The Ministry of the Environment, the 2013 fiscal year the business has been developed by the national 16 adoption, JASFA was the only adopted in the Tohoku region. In Higashimatsushima, to expand the technician training citizen course of photovoltaic power generation works as an environmental learning for adults、for children as an environmental learning、It obtained the popularity of children which show off in school,  education and events, that cooking the sunlight using “solar cookers” to change to the heat.

The nationwide only agreement at a point features that example that with the environmental protection cooperation initiatives are planning to local revitalization over the future rather than to the other, case leading to the agreement with local governments, while engaged in a steady environment learning are nationally rare cases.

Even Tohoku Environmental Partnership office (Sendai) doing an intermediate support of the initiatives by the commission of the Ministry of the Environment,  「Local government agreements on cooperation set in the environmental field, it is a very advanced even as a disaster area、become highly encouraging as to contribute to the reconstruction of Tohoku hopeful.（Kuniyasu Inoue, Executive manager）

In JASFA of industry-university cooperation organization,Industry, academia and government collaborative research, such as the application of the technical features of the local small and medium-sized enterprises、Industry Promotion planning and material provision of environmental projects with the National Institute of Technology, Sendai college, New Energy and Industrial Technology Department Organization）it has developed the activities that members of the technology is utilized, such as in joint research with Higashimatsushima 、for reconstruction policy utilizing these industrial technology is carried out, but also to show a little bit different aspect and other affected areas.