Miyagi Prefecture Kami-cho, the construction industry “Sato Komuten” is、The power of the site office of road construction are working on their own power-saving measures covered by natural energy.Taking advantage of the power of wind and photovoltaic to such indoor and outdoor lighting, to self-sufficiency for the majority. It has been attracting attention as an emergency power source.
Office premises in which he set the construction site near the Sanriku motorway Tome Towa-cho, in July, power generation equipment “hybrid smart device” with two small propeller and solar panels were installed (height 6.5 meters) 1 groups.
Power produced is stored in a storage battery incorporated in the device、Supplied to the office via an extension cord. Output is 1260 watts, installation costs 300 million. Supplied emitting diode (LED) lighting is used as a streetlight.
Even if the power outage in the disaster, capitalize the storage amount streetlights and mobile phones, such as the power supply of communication equipment such as a personal computer.
Atsushi Sato, President (33) “power to use in the office can cover almost on their own. Is open to residents in the event of a disaster, you want help to make and receive, such as the damage information,” he says.
Mabuchi-Engineering has developed device. At the edge company and Sato Komuten were both member companies of the Institute “JASFA”, has been introduced.
Device can be moved, it can be installed shelters and schools, as well, such as the park. Sato Komuten, even after the construction of the Tome has been completed in March next year, it is thought to take advantage of in a different site office. 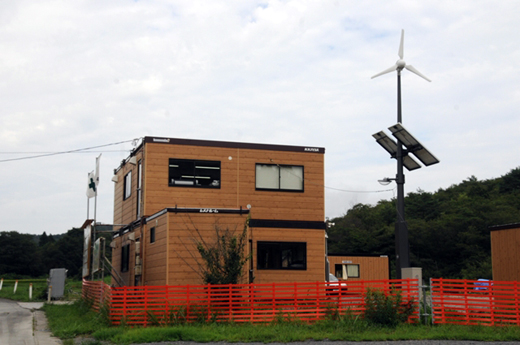